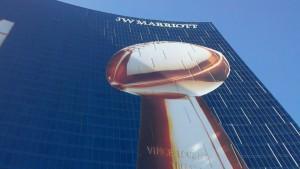 Since today is Super Bowl Sunday, I decided it was time to share one of the best trips I’ve ever taken.

A year ago Ms. Holy City Sinner and I went to the freaking Super Bowl. Even a year later it still seems so surreal. Despite the high price tag, it was worth every penny.

Football has been a huge part of my life for as long as I can remember. My dad was a youth football coach since before I was born and he would eventually coach both my younger brother and I.

As far back as I can remember I was a New York Giants fan. Growing up in Connecticut it was one of three “local” team (Jets and Patriots being the others). I rarely missed a game, even during those awful mid-to-late 90s seasons. I lived and died by what happend to them on Sundays.

I also devoured this Super Bowl VHS I had. It showed highlights from every championship up until that point. I studied that tape and intently watched every subsequent Super Bowl as if I were studying for a final exam.

I promised myself that if I could ever make it work, I would go to a Super Bowl. It was one of my life goals and I fully intended on achieving it. It would be even more special if the Giants made it, but I wasn’t holding my breath.

It may seem silly, but the Giants mean more to me then I sometimes care to admit. It’s just a sports team and in the grand scheme of things they are inconsequential, but they remind me of one of my grandfathers, my little brother, and the rest of my football-loving family. Those tie-ins make the team and the sport a little more special to me then most. 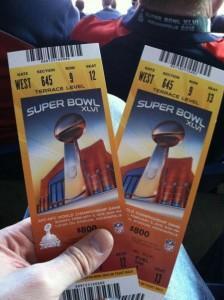 I was literally on the edge of my seat. My stomach was in knots and I was sweating a little as I watched the Giants go back-and-forth with the San Francisco 49ers. My girlfriend, who thankfully loves football, probably thought I was just nervous because it was such a big game. Little did she know I had already won Super Bowl tickets on eBay and if New York didn’t win, I had no idea what I was going to do.

When Lawrence Tynes booted the game-winning field goal, I lept off the couch screaming, “We’re going to the Super Bowl!!!” over and over.

Ms. Holy City Sinner was smiling and repeated, “Yes you guys are!” to which I replied, “No! WE’RE going to the Super Bowl!”

Even though her Pittsburgh Steelers weren’t in the big game, she was almost as excited as I was once she realized what I was saying.

Since the tickets were ridiculously expensive, we tried to cut costs anyway we could. We flew into Chicago instead of Indianapolis and stayed in a hotel about two hours away. The hotel was literally in a different time zone than Indy, but we had to do it in order to save money.

We got to the Midwest on Saturday afternoon and spent the rest of the night traveling and checking out the NFL Experience near Lucas Oil Stadium. I wish we had more time, but we squeezed as much as we could into our quick trip.

We went back to Indy early Sunday afternoon and spent a lot of time walking through the massive crush of people. 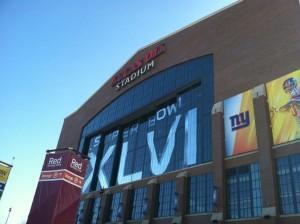 There were bands playing, food vendors, a zip line, live TV broadcasts and much more. It was insane.

We went into the stadium as early as we could and the entire experience was amazing. We walked through this “Super Bowl village” before finding our seats. There were games, contests, and memorabilia everywhere.

Once inside Lucas Oil Stadium the real fun began. Everything was pristine in this beautiful indoor facility. There were Super Bowl logos everywhere and you could feel a buzz throughout the building.

Kelly Clarkson sang the National Anthem and I could feel myself getting anxious. I had tried all day not to get worked up but it was too much to handle when I realized the game was just minutes away. I couldn’t believe that I was sitting at the Super Bowl and was about to witness my favorite team play for the title. It was incredible. 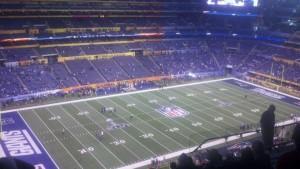 We were seated in the upper tier on the same side as the TV cameras. We were in line with the endzone that had the Giants logo painted on it.

I won’t bore everyone with the emotional rollercoaster I was on during the game, but I will recap two of the biggest plays.

We were on the same side of the field were Mario Manningham made his incredible catch. We couldn’t really see that well and had no idea if he kept his feet inbounds. I knew it was close, but I had my doubts. When they finally showed the replay on the jumbotron, it was clear he had made the grab. I was elated, but it wouldn’t be until after the game that I’d know how important that play was.

Ahmad Bradshaw scored that odd go-ahead touchdown right in front of us just a few minutes later. I’ve never been more conflicted on 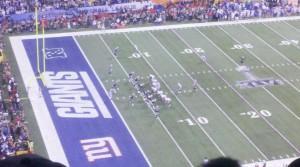 a scoring play though. I was so excited that they took the lead, but I knew there was far too much time left for Tom Brady and the Patriots.

On the Pats’ next drive, it all came down to one play – a hail mary in the end zone farthest from us.

The ball seemed to hang up in the air forever. When it came down, I saw the Giants tip it and then watched as the ball caromed out of my sight. I saw some fans cheering in that endzone, but I couldn’t tell what team they were pulling for. I held my breath and prepared for the worst. 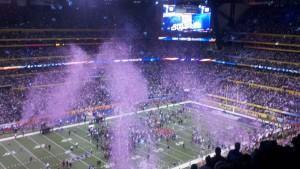 A few seconds later, I saw the Giants sideline erupt. It was over. The field was flooded with people. Confetti blasted up into the air and streamers fell from the ceiling.

My team had just won the Super Bowl and I was in the building to witness it. Unbelievable.

It’s something I will never forget and still seems so unreal to me.