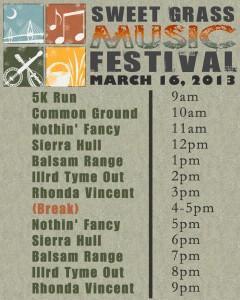 Another music festival can be added to your yearly Charleston calendar. Joining the ranks is the Sweet Grass Music Festival, which will be making its debut on March 16th at Patriots Point.

The festivities start early with a 9 am 5K run/walk. Bluegrass musicians will dominate the remainder of the festival with sets running from 10 am until 10 pm. The entire lineup can be seen in the image on the left.

There will also be a benefit concert played the next day by Balsam Range at the Seacoast Church in Mount Pleasant.

Tickets for the festival are $25 (or $30 if purchased at the gate). Children under 12 are free. The Sunday benefit concert will run $10 per ticket.

All proceeds from Sunday will go to the A21 Campaign.

Tickets for the festival and/or charity concert can be purchased here.

Follow us
Related Topics:patriots pointSweet Grass Music Festival
Up Next

Why I’m Never* Going to the Oyster Festival Again