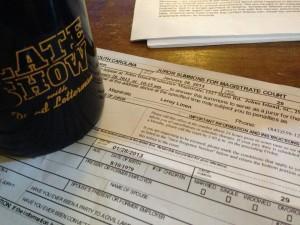 The episode of The Late Show with David Letterman featuring Shovels & Rope airs tonight at 11:35 pm on CBS.

Shovels & Rope announced today that they will be appearing on The Late Show with David Letterman, but only if Cary Ann Hearst can get out of jury duty.

That’s right, on the same day the duo was confirmed for the late-night talk show, Hearst received a letter telling her it was time to perform her civic duty. I have a feeling she may be able to postpone though.

Hearst and her husband/band-mate, Michael Trent, will be on the January 30th episode of The Late Show. So set those DVRs! The program airs at 11:35 pm on CBS.