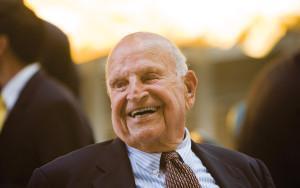 The College of Charleston announced yesterday the passing of their President Emeritus Theodore Sanders Stern. He was 100.

In 1974, the College of Charleston honored him by naming the student union building after him.

Even in recent years Stern was frequently seen around campus and was widely respected. You can read about all of his accomplishments in the official press release from the College of Charleston.

Reason on Folly Beach? About time.