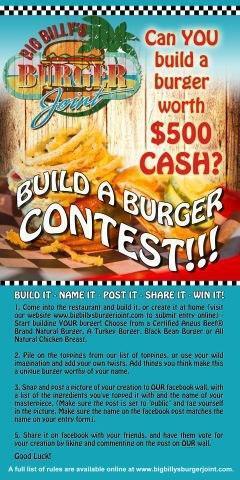 Big Billy’s Burger Joint has chosen eight entries from their  “Build a Burger” Contest to go head-to-head at the Winners Circle Party next Saturday (1/19) at 6 pm.

The event is open to the public and will go down at the North Charleston restaurant’s home turf at 5070 International Boulevard.

The winner, who will be chosen by celebrity judges, will receive $500 and the addition of their creation to the Big Billy’s Burger Joint menu.

Details of the contest are HERE.

Much of the info in this piece came from a press release sent out on behalf of the restaurant.

Follow us
Related Topics:Big Billy's Burger Joint
Up Next

We Are The World: Charleston Style!