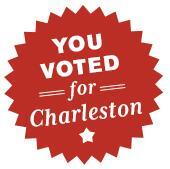 Do you think Charleston is the tastiest town in the South? If so, you should head over to Southern Living’s website and vote for the Holy City.

For the second straight year, the city is one of the finalists for the publication’s “The South’s Tastiest Town” designation.

The other towns on the list include: Asheville, Atlanta, Austin, Durham, Greenville, Louisville, Memphis, Miami, and New Orleans.

Votes will be accepted through February 28th with the winning town being announced in Southern Living’s May issue. You can find that issue in stores or online on April 19th.

All voters have the option of being entered into a drawing for the chance to win $1,500 toward a trip to one of the cities on the finalist list.