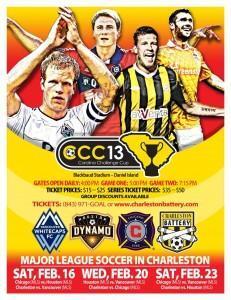 The reigning USL Pro Champion Charleston Battery will return to action next month in the Carolina Challenge Cup. The event will feature four teams and six matches over three days at Blackbaud Stadium.

Besides the hometown Battery, there will be three Major League Soccer teams playing for the trophy. The Chicago Fire, Houston Dynamo, and Vancouver Whitecaps FC will represent the MLS.

It’ll be a great opportunity for Charleston fans to get their first look at the champs as they take on some top competition.

If you are interested, here are the necessary details:

Chicago vs. Houston, Charleston vs. Vancouver

Houston vs. Vancouver, Charleston vs. Chicago

Chicago vs. Vancouver, Charleston vs. Houston