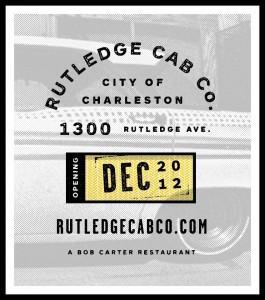 It’s not just Holy City residents that are getting antsy about the opening of the Rutledge Cab Co. anymore. Now, people around the the country are anticipating the restaurants debut.

Eater listed Robert Carter’s new venture as one of the 40 Most Anticipated Restaurant Openings of 2013. It was the only Charleston establishment to make the list.

Despite the original promise to open in December (see logo on the left), Rutledge Cab Co. has still yet to debut. Eater guessed it won’t start business until March, while the Charleston City Paper thinks the restaurant is ready to open any day now.

So, in summation, no one knows anything, which seems to be a common thread when it comes to restaurant openings.

Regardless, of when the Rutledge Cab Co. opens, you can expect much fanfare.

Charleston: One of the Best Shopping Cities in the World