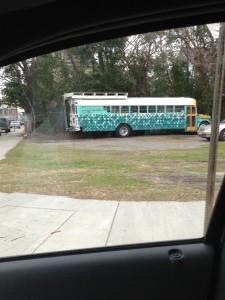 I posted the picture to Twitter and shortly thereafter @mgarrett12 informed me the vehicle was something called Busta Ride. It’s hard to tell with certainty if that is the case or not, but it looks to be the case. Whatever it is, it caught my attention.

***UPDATE 1/7/13*** – After publishing this post, Campbell Brown of Gaslight Street provided even more details via Facebook about the bus.

“That is actually the original bus of a two part series called “The Hoobu”. The second bus, which burned up on the Ravenel, was named “Busta Ride”… And she was awesome too. Shelby Nelson is the owner if these and there is a new one that just made the scene – not sure the name. “Hoobu” has seen its fair share of music festivals, parties, etc – it has also been Gaslight Street’s official touring vehicle on some of their southeast legs… Good times.”