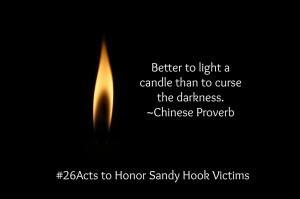 A few days ago I passed along the story of Anne Curry trying to inspire the nation to offset the evil and darkness of the Newtown, CT shootings with random acts of kindness. Her suggestion spread quickly and has caught the attention of numerous news outlets, and more importantly, the imagination of the public.

I saw the types of amazing things people were doing for others via posts on Twitter and decided I needed to participate. I wrote a blog post about it and I’m happy to saw that the Acts of Kindness has started to make its way into Charleston. Here are a few examples I’ve been told about.

***Update 1/4/13*** – Today, some customers at the Danbury, CT Starbucks (where Lauren Rousseau worked) will be getting free gift cards from me. I mailed the gift cards to that location when they told me they couldn’t take payments over the phone. They should have arrived by now and hopefully are given out today or tomorrow.

-I bought doughnuts for my girlfriend’s coworkers and dropped them off at their work.

-Ms. HCS and I donated some supplies to the SPCA

-Other plans in the works.

“Yesterday I picked up a man walking in pouring down rain and took him to his destination.”

***UPDATE*** 12/28/12 – “Saw an injured fox and kept it from running back onto Main Street and called animal control. Stayed 20 minutes until they got there to rescue it”

“We were the recipients of one, we locked ourselves out of our car w/o phones, a stranger lent us their phone to call AAA! We then paid it forward by giving the AAA guy who showed up super fast a bag of S’mores for Four and some homemade pickles!”

If you have done a random act of kindness, share it with me on Twitter, Facebook, or e-mail. You can stay anonymous, but don’t hide your story because it may inspire others to something similar!

-Volunteered for Christmas Commandos who deliver toys to children who have lost a parent over the last year.

-“I surprised a neighbor with dinner for her family because she’s in the hospital with pneumonia.”

Follow us
Related Topics:#20acts#26actsconnecticut shootingnewtownrandom acts of kindness
Up Next

Dolphins in the Cooper River