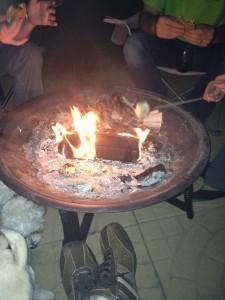 One recent night I was sitting around a fire pit with five of my friends, but we weren’t talking very much. Normally when we gather around the fire everyone is laughing, telling stories and sipping on beer or wine, but on this night we were enjoying a different guilty pleasure – s’mores from Haypenny Confections. The tasty snacks kept us quiet as we munched away on all the different flavors of marshmallows.

Once someone finished their dessert, there would finally be some chatter (mostly about how much they liked the s’mores) while they grabbed another marshmallow and start cooking it.

Everyone had a great night and despite being a group of twenty-somethings, we made plans to have another “S’mores Party” soon. Haypenny has made cooking around the campfire fun again.

I wrote about this new business a few weeks ago and had been dying to sample their products ever since. Sure, s’mores are a classic, but somehow owners Danielle and Tanner Loveless have improved upon it.

The husband-and-wife duo have added their own spin, which includes hand-crafted gourmet marshmallows in a variety of flavors and their “house”-made honey graham crackers. In the future they plan on using a local chocolatier to complete the trio of necessary ingredients.

The concept of flavored marshmallows is a genius idea. As people get older, their palate can shift, but adding this small wrinkle is enough to bring them back to the traditional snack. A lot of folks are looking for something new and different and Haypenny provides that with flavors like classic vanilla, chocolate, strawberry, mint chocolate, cookies and cream, toasted coconut, peanut butter, and seasonal options such as pumpkin spice, apple cider and peppermint stick.

I liked the subtle difference each flavored marshmallow added to the classic treat. The flavors didn’t completely dominate the entire snack, but rather complimented it. My friends agreed, which explains why almost everyone had their own favorite version. Mint chocolate seemed to be the winner by the smallest of margins however.

The honey grahams are more cookie than cracker, which was another nice touch. It doesn’t make as many crumbs as the crackers tend to. They do a better job of keeping the entire s’more in place with minimal mess. 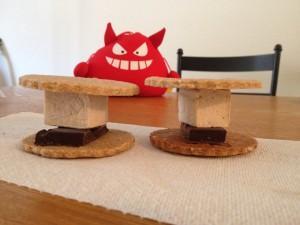 Clearly, Haypenny Confection has added enough of a twist on this classic treat to make it unique and enjoyable by people of all ages. We even got one of our friends who “didn’t really care for” s’mores to enjoy Haypenny’s creations.

The company is still in their infancy, so their products are not widely available just yet. They are not currently licensed to sell prepackaged items (only direct-to-consumer) but are in the process of getting that approval.

In the meantime, you’ll either have to catch the company at local events (check their Facebook or Twitter for where they’ll be) or order directly from their website in order to try their delicious s’mores.

They are Holy City Sinner approved, so you know they’re good! 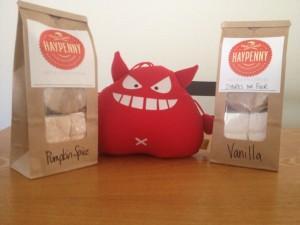