“Foot-In-Mouth” – a HolyCitySinner.com series where I write something more opinion-based than the normal entries.

You may already be aware of the uproar that occurred in the wake of the Mount Pleasant Christmas Light Parade, but if you missed it, here’s a quick recap…

During the parade a bus with “adult-themed advertising” passed by all those poor, unsuspecting spectators – including the children! Think of the children!

The folks who drove the bus did not fully complete their entry form, so the advertisement they used caught everyone off guard.

How bad was it? Well, the Post & Courier used the phrasing “XXXtra content” in their headline describing the fiasco and Town Administrator Eric DeMoura felt it necessary to release a statement explaining the situation.

“We do not support the adult-themed advertising presented on the float,” the statement read. “The language was contrary to the family-friendly nature of the parade and brought controversy to an otherwise exceptional parade.”

Yikes! This whole thing sounds pretty unbelievable. So, what exactly did the bus look like? Must have been pretty raunchy, huh? 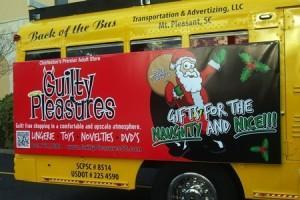 Wait, what? It must be behind that bus, right? No? That bus with the innocuous banner is what everyone is upset about? Seriously?

Yup. That was it. Perhaps the tamest adult store advertisement in history. I mean…there isn’t even a single innuendo. The “worst” word on the banner may be “lingerie.” How is this even a controversy?

Supposedly, town officials received “several” complaints regarding the bus. I would be surprised if “several” actually equated to something that was more than four complainers.

The only thing missing from the pictures is a band, Chinese Fire Drill, who were playing on the roof of the bus. Besides that what you see in the picture above is all the parade-goers saw.

I’m surprised those outraged people aren’t also complaining about the band’s name or the phrasing on the top of the vehicle (“Back of the Bus”) for being vaguely racist. I guess they only have time for one overblown hissy fit at a time. When presented with something slightly sexual vs. something involving race, you had to know which was going to be the chosen as “outrage of the week”.

Let’s get real here, there is absolutely nothing offensive about that advertisement. If any curious kids ask their parents about the store, a simple “It’s a boring store for adults with stuff kids wouldn’t be interested in” would probably satisfy their fleeting curiosity. Kids have got to be seeing/hearing far worse things on TV, in movies, on the radio, in video games and/or in conversations with their friends. In fact, this may have been the least offensive thing they saw or heard that day.

For the parents that were in attendance at the parade – get over it. There are far more important things in the world that you should be getting upset about. Use your anger and frustration on something constructive and worthwhile. If people got half as worked up over REAL issues as they do over inconsequential things like this, we could solve some real problems.

Follow us
Related Topics:foot-in-mouthMt Pleasant Christmas Light Parade
Up Next