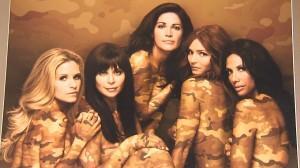 The television show “Army Wives” has become ingrained in the Charleston culture. The show predominately takes places in the Holy City and thus it is filmed throughout the area. Some of the cast and crew live in the city and spotted around town periodically. Plus, many locals have shown up on-screen thanks to the “Army Wives” extras program.

With the show being renewed for a seventh season, there will be plenty of opportunities for YOU to become an extra. It’s actually really simple and pretty likely that you’ll be contacted if you sign-up. How do I know? Because I was an extra on the show once! I actually received multiple invites to participate last year, but couldn’t due to my work schedule. I’ve also had a couple of friends that were extras.

The process is actually pretty fun and I recommend trying it out. The best part? You are paid a decent amount even if you don’t end up on TV. Filming generally takes place on weekdays and call times are usually pretty early in the morning. Depending on the scene(s) they are filming and how well it goes, you could be there all day.

It may seem intimidating but staff members are very nice and accommodating. You are given detailed instructions on where to be, what to bring and what to expect before you arrive on set. Once there you are (usually) greeted with a catered breakfast and helpful extras staffers and wardrobe folks.

After that, your responsibilities vary. When I was there we were driven to an apartment complex in North Charleston where they were filming. We sat around and watched the actors/directors/crew do their thing most of the time, which was still interesting to see. Eventually, you are given a task to do in the background of the actors.

My star-turn was as a guy getting his mail. I was pretty much the greatest extra that was there, so it was clear they gave me the best role. While the two actors in my scene spoke in the foreground of the shot, I walked to the mailbox, grabbed my mail, flipped through it a little and then walked out of the shot. I repeated this action about 4 times before they were satisfied with the scene.

Eventually, they transported all of us back to their main staging area where we got to eat food and hang out until they reviewed the film and decided they were satisfied. We were then allowed to leave. I was there a total of 6 hours, but I’ve heard of extras being there longer than that.

It was a great experience, but sadly, all of the extras that day did not end up on TV. They cut all of us out of that particular scene. Clearly, it wasn’t my fault because I was a revelation.

Despite not making it on-air, my check arrived a couple of weeks later – thus making me a paid actor. This, of course, is something I like to brag to my friends about.

Filming of the new season will begin in December and should last until May. If you think you may have some availability, click here to register to become an extra. I obviously enjoyed my day on the “Army Wives” set and I’m sure you would too.