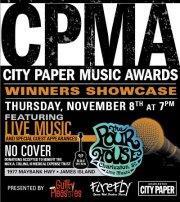 The Charleston City Paper won’t be announcing the winners of their Music Awards until November 7th, but they have released the details for their 2nd Annual Winner’s Showcase.

The FREE awards show and concert celebration will take place at the Pour House on Thursday, November 8th. Doors open at 7 pm with Fowler’s Mustache playing on the back deck. The main event begins inside at 8. Last year’s Up-and-Coming Act of the Year, Old You, will be performing.

They City Paper will also be accepting donations that will benefit the Nick A. Collins Medical Expense Trust.

I plan on attending, so I hope to see you all there!

***UPDATE 11/8/12*** The City Paper is now reporting the addition of the following bands to the night’s lineup:

More details can be found HERE.