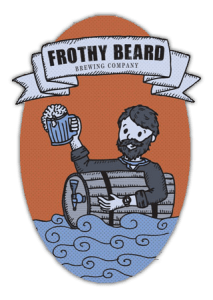 You can add another brewery to the ever-growing list of craft beer-makers in the Holy City.

Barring any setbacks, the Frothy Beard Brewing Company will open to the public in the next month or two. The company has already signed a lease and the founders are prepping for their big reveal.

Michael Biondi, Steve McCauley, and Joseph Siconolfi, the three founders, are in the process of setting up shop at 7358 B Peppermill Parkway in North Charleston, but Biondi was able to step away for a few moments to speak with me about the company.

HCS: The Frothy Beard Brewing Company is a pretty unique name, where did it come from?

Biondi: Our name came from a combination of our love of facial hair and our love of adventures and beer drinking. In many…epic adventure movies/novels the characters usually have a nice robust beard and take long swigs of their beers which leaves a nice frothy residue on their face. We had tossed around a few other names before that, but this one fit us and our personality best.
What made you want to get into the craft-brewing business?
We got into craft beer brewing shortly after being introduced to drinking craft beer. We found out we could make it at home and have been doing it ever since. We started having parties showcasing our beers seasonally and found out that people really liked them and so it fueled our passion.
Where does the business currently stand?
We just signed a lease and have moved in our equipment.  Our next step is to fit the building to our needs and start ordering more equipment while our license is being approved.
When will you be open to the public?
We plan on opening to the public possibly in the next month. We won’t be able to serve beer until late December or early January.
When will your beers be available in stores?
Beers will be available at our brewery for growler fills or on tap around town, hopefully by the 1st of the year. Stores will be a different story. We have a long-term plan to start producing bottles once we grow big enough to supply those kind of demands.
What types of beer do you brew?
We brew all styles of beers. Our latest few have been a Belgian Tripel, a Saison, an Oktoberfest and a Stout. We usually try to follow a seasonal brewing style.
What do you think of the Charleston craft beer scene?

The Charleston craft scene is blowing up and it’s amazing. We are so lucky to be in a place that supports the scene so much. Charleston used to be a port full of breweries and since prohibition has struggled to bring craft beer back to the region until the turn of the 21st century. Now with our brewery opening soon, we are looking at five in the local area and I hear of two more in the planning stages.
Was it hard to break into?
It was not hard to break into. All of the local brewers are so supportive of newcomers and have taught us so much. I think the biggest obstacle is financing and finding the perfect location.
What are the long-term goals of the company?
Our goals are to make great beer that Charlestonians can be proud to drink. We really enjoy crafting new recipes and using local ingredients to create some beers with local flavors. We don’t want to be the next Sam Adams, but we would love to grow big enough to supply a large portion of the Southeast.
Is there anything else you think the residents of Charleston should know?
We are open to the public voice and want to connect with the community in a lot of ways, including dinners, tours, tastings, sporting events, trips, brewing classes and joining forces with other brewers to bring the community closer. We are starting out really small and want to use that to our advantage in being flexible.
Speaking of connecting with the Frothy Beard Brewing Company, you can reach them on: Facebook, Twitter, and their official website.
—
Also, if you want to stay up-to-date on all things Charleston, you can follow me on TWITTER and like me on FACEBOOK.