“Foodventures” will be a series about the different foods I try.


I fashion myself as a younger Anthony Bourdain – I write, I travel, and I’m hungry for more. Sadly, this is far from the truth. Regardless, I will be doing my best to try different and odd foods at every opportunity I get.

Speaking of Bourdain, he always raves about how good bone marrow is. In fact, many of the talking heads on food and travel shows boast about how good it is. Their enthusiasm made me anxious to try some as soon as I could.

This task proved difficult as there are not many places with bone marrow on the menu. Butcher & Bee had it one day, but I couldn’t make it over there in time.

Just a few weeks ago, the stars finally aligned! I was following Nani Gilliland’s Fundraising campaign, when they announced an event at Graze Restaurant in Mt. Pleasant (speaking of Gilliland, go donate to her cause HERE).

I debated making the trip across the bridge as I browsed their menu. There were lots of tasty-sounding entrees, but what sealed the deal was their oven-roasted bone marrow. 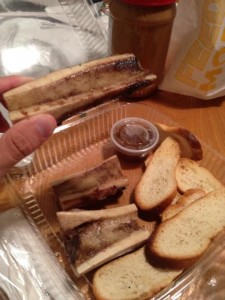 The appetizer came with three pieces of bone (each about 3-4 inches in length) that were cut in half length-wise, which left the marrow exposed. They were oven-roasted and had rosemary salt on top. Sourdough toast and sweet onion marmalade also came with it.

It didn’t smell particularly appetizing, but I was still excited to try it. The marrow resembles the fatty pieces of a steak (you know, the whitish glob parts). So, no, it didn’t look appetizing either.

I scooped some out and took the plunge. The consistency was that of jelly…but grosser. It was just like putting the aforementioned steak-fat in your mouth. It tasted faintly of steak, but was pretty terrible.

Words cannot express my disappointment. I had built this up in my mind to be the nectar of the Gods and it was anything but.

I’m willing to try it again – clinging to the faint hope that maybe Graze didn’t prepare it in the best manner possible. I’m not that hopeful though.

If you’ve never had marrow, I certainly do NOT recommend it. I would only try it if you are curious or are open to trying new foods.