I wasn’t entirely sure what to expect from The Original Wailers at the Pour House last Tuesday night. After all, despite their name, the only original member in this outfit was Al Anderson. Was this going to be a Bob Marley cover group or an original band? The answer turned out to be a hybrid.

They played a lot of classic Marley tunes like “Exodus,” “Three Little Birds,” and “Redemption Song,” but also some newer original songs. The band sounded good and the crowd was certainly into their set. Everyone in the Pour House was swaying back-and-forth and chanting along to the relaxed reggae songs played late into the night.

Even though Anderson was the only member with direct ties to the Bob Marley songs, it was still a unique experience to hear the tunes live. It’s not something many people can say they’ve experience. Sure, it doesn’t compare to having actually seen Marley in concert, but at least there was some tie-in to the reggae mastermind.

Local rockers Wadata and Old You provided the support for the Original Wailers. Wadata played on the deck during the early evening hours, while Old You rocked the crowd just before the headliners.

I only caught a few moments of Wadata’s set, but it was enough to know I’d want to check them out again in the future. Those who were hanging out on the patio were definitely enjoying their funky sound.

Old You absolutely killed it. The band, particularly lead singer Young-Mi Feldsott, exuded unparalleled excitement throughout the night. Feldsott was visibly giddy as she expressed her gratitude to the fans and the Original Wailers. It was clear they were excited to share the stage with a legend like Anderson.

It took just a handful of songs, but the fans warmed up to the band and came close to the stage at Feldsott’s urging. Once there, the fans didn’t want them to stop.

Caleb Bodtorf (lead guitar) was phenomenal again while John Pope (drums) and Paul San Luis (bass) lead the way through the band’s flawless improvisations. The sound was up much higher on San Luis’ bass this week then it was for the show at the Windjammer, so you could hear him much more clearly. This was an added bonus because he sounded awesome. It’s not often you can hear the bass clearly in a live setting, so it provided the audience a better idea of San Luis’ talent.

Old You had another great set, but really rocked out on “Sleuth,” “White Rabbit,” and “So Steady.” The band is going to be starting a weekly gig at the Music Farm this Wednesday, so definitely go check them out!

Meanwhile, enjoy these pictures from the show! Sorry for the terrible quality, but the lighting was not conducive to photo-taking. That’s also why you’ll only find three pictures here.. 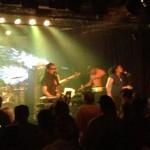 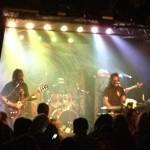 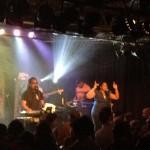