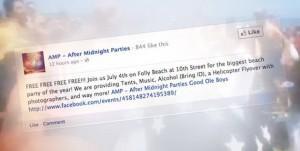 Picture from The Digitel

There’s lots of blame to go around for what happened on Folly Beach on Independence Day. It’s clear the vast majority of it belongs to the idiots who decided fighting police was the best thing to do that day. But what about the people who cheered them on? Or the ones pouring beer on police? Surely, some blame belongs with them.

And what about AMP (After Midnight Parties) and Good Ole Boys? Those two businesses advertised and promoted a party around 10th Street that day. How much blame (if any) do they deserve?

I thought they deserved a good chunk of it. However, after the smoke cleared, I wondered if I was too quick to judge them. AMP is refuting all of the vitriol aimed at them while Good Ole Boys has remained quiet during this whole issue.

Both groups have removed any trace of their party from their respective Facebook accounts and websites. They’ve even deleted a majority of the negative comments from angry Charlestonians that cluttered their Facebook pages. You can view these pages here: AMP (After Midnight Parties) and Good Ole Boys.

In the immediate days after the brawl, the only thing I could find was AMP’s complete denial of involvement. They refuted many of the “facts” that other media outlets reported and it was convincing too. I started to wonder if they were innocent bystanders.

That feeling didn’t last long however. I found the screen capture that you see at the beginning of this post (via the Digitel), which is just the beginning of their denial unraveling. The screen capture came from AMP’s Facebook page and it shows how they promoted the party. They touted it as the “biggest beach party of the year” and made sure to mention they would be providing alcohol. The post also lead off with big exclamations of the party being “FREE!”

No wonder they erased it. None of that bodes well for them.

Now their response just makes me angry. It’s their complete refusal to believe they MAY have done something wrong and their selective editing on their Facebook pages that continues to rub people the wrong way. They need to take SOME responsibility for what happened. Instead, they offer flimsy defenses based on their location on the beach, their vague “green light” from Folly authorities, and that they didn’t personally know those who were arrested. There are issues with all of their points.

Proximity to the incident does not absolve them from aiding in the creation of the atmosphere that day. Same goes for turning off their music when asked. Everyone who participated in the party, particularly those who did some measure of promotion, hold some of the responsibility.

It bothers me that another of their defenses is that they didn’t know the people arrested. Just as it’s impossible to know who was there for their party, it’s impossible to know who wasn’t. Just because they don’t know the criminals, doesn’t mean they didn’t share a role in what happened. Those people very easily could have been a part of AMP’s party, whether they realize it or not.

I also loved how they tried to deflect negative comments away from their site by saying the proper forum is to go to the City Council instead. Well, guess what? The “protesters” did go to the City Council and now alcohol is banned on the beach. It’s within their right to voice their anger towards you if they so choose.

The most glaringly asinine part of their statement is when they said, “Our promotions did not make the location any crazier than in years past, which is proven by the decrease in complaints from past years.”

Um, did they miss the whole brawl thing? They do realize their whole “press release” is about that fight, right? A fight with a magnitude that has never been seen on Folly Beach. Also, what do they mean by a “decrease in complaints from past years?” In light of the fight, this doesn’t make much sense.

They also claim they went through the proper channels, but the Folly Beach Department of Public Safety is saying otherwise. ABC News 4 is reporting  that a detective is “currently investigating last Wednesday’s event to find exactly what went on, and if the beach party may have contributed to the brawl.”

They quote Chief Dennis Brown saying: “We had no knowledge of that event that was coming. We had no warning. Nothing.” ABC News even quotes him as saying had Public Safety known about the party, there would have been no injuries, trash, or arrests.

“If the laws had been adhered to, we might not be having this conversation,” Brown said. “The event should not have taken place.” penalties against the company could very easily happen. (Same source)

So, AMP and Good Ole Boys, I’ve “investigated the relevant facts before participating in the discussion on the issue” and now the police are too. No amount of condescending remarks on Facebook or press releases are going to make this problem go away, especially when you look to be at least partially to blame.

Perhaps you should back off your arrogant stance and take some responsibility for the role you most certainly played in the Folly Beach brawl.