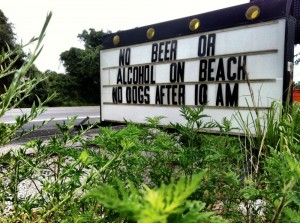 So how exactly did it come to this? How did one, albeit HUGE, fight lead to an “emergency session” for the Folly Beach City Council and the subsequent prohibition of alcohol on the beach? To many non-Folly residents like myself, this seemed to come completely out of the blue. People in that community claim folks on the outside don’t really understand how bad the problem is.

A HolyCitySinner.com reader, Greg Elias sent me an e-mail regarding the alcohol ban and he brought up some good points. Elias is a Folly resident who told me he doesn’t agree with a total ban on beach drinking, but did think the city has had a lot of issues over the last year or so that may have lead to a breaking point. Elias wrote:

“I don’t necessarily agree with a total ban on beach drinking, BUT it has been a truly insane summer/year.  The July 4th incident was just the last straw, as there has actually been some pretty horrific stuff going on.  It started with twin shootings one night back in December, then (in no particular order) the beach tazing that went vial, the cat mutilation, a cop shooting at a suspect in the middle of a residential street, a repeat-offender molester attacking a woman and a child in separate incidences, multiple rapes and break-ins (reported in local newsletter), and of course the fight on the 4th.”

Elias knew none of those incidents were related to beach-goers having alcohol on the beach, but instead was pointing out why the community was already on edge leading up to the “Folly Brawl.” He made a great point that the residents might have felt this was the first problem that they could “take control” over. The other events couldn’t be solved with quick legislative action.

It’s obvious to me that the ban solves absolutely nothing. Maybe some Folly Beach residents are sleeping a little easier now, but I fail to see how this solves any of the other issues. In fact, I don’t even think it’s going to stop people from drinking on the beach. They are just going to find more creative ways to do it. Case in point: I see people drinking at Isle of Palms all the time. I will allow that the ban will lower the amount of visitors drinking, but it won’t remove it completely. To believe otherwise is naive.

And was the drinking really out of control? In my opinion, no. I based this on my many visits to the beach, conversations with others, and reading all about this issue. The biggest complaints that I came across involved: the amount of litter left behind by drinkers, drunk drivers, the “reputation” Folly was getting, and what happened on Independence Day. These are valid concerns, but ones that could be controlled by not punishing the whole.

Hiring more security or having more police work on holidays could have helped on July 4th. More feet on the ground would also help with the littering problem. People would be less likely to litter if police were around. The City Council could have also enforced stricter fines for littering. Very visible DUI check points would also help curb excessive alcohol drinking on the beach. With more visibility, some of these issues would be alleviated by a significant margin. Why didn’t Folly residents or City Council rally around all of those incidents like they did after the fight? If these were seriously discussed, maybe the brawl doesn’t happen because people are aware of the police presence around town. 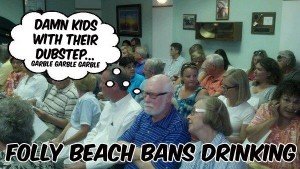 Instead, a knee-jerk reaction to a horrible incident brought us to the complete ban of booze on Folly Beach. Wherever there is drinking, there are going to be people who can’t handle their alcohol. Should the minority be able to ruin it for the majority? Should we just ban drinking everywhere because someone will inevitably do something stupid?

Do the Folly Beach police and/or safety team need to be spending all their time walking the beach writing tickets for people drinking when they should be out preventing and investigating real crimes? As I mentioned, an increased presence in the city would have the same effect and would keep the police on the streets to watch out for problems like the ones Elias mentioned.

There’s a bigger issue on Folly than people having beers on the beach, but that’s all the residents wanted to focus on In the end, nothing is really solved.