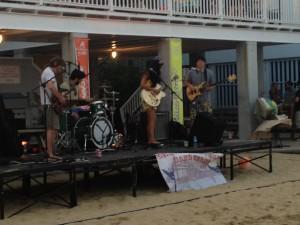 A couple weeks ago I decided to head to The Windjammer on the Isle of Palms to check out Old You. The Charleston band was slated to play on a stage in the sand behind the venue and a night spent in the warm weather, sipping on drinks, listening to live music was too good to pass up. Little did I know that the night would end with my mind being blown by the incredible musicianship of the quartet.

I did a Local Music Spotlight on the band back in June, but admittedly had only half-heartedly listened to a couple of their tunes online. While I was busy writing other articles I caught only bits and pieces of the music and decided I would try to see them live some day.

I went with my friend Allen (who plays in the band Cover of Afternoon, which is a post for another day) who decided to tag along even though he knew absolutely nothing about Old You.

It didn’t take long before we were hooked. Lead singer and rhythm guitarist Young-Mi Feldsott is the first thing that reels you in. Even though she’s diminutive, her voice is anything but. She has a bluesy uniqueness that lulls you over to the stage. Feldsott appears to put her soul behind each word, melody and note, which makes her impssible to ignore if you are within earshot. Plus, the guitar she wields is pretty freakin awesome. 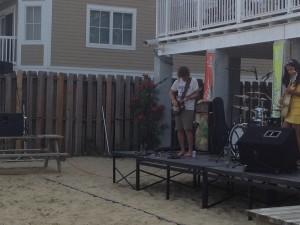 Then, almost methodically, lead guitarist Caleb Bodtroff, drummer John Pope and bassist Paul San Luis took turns drawing us in. Throughout the set each musician displayed that they were just as talented at their respective craft.
Although appearing to favor different styles of music, Pope (more of a jazz-style) and San Luis (funk) still worked flawlessly together. In fact, the entire band seemed to have varying backgrounds in music, but this may be to their advantage. Their sound smoothly transitioned between soul, funk, acid rock, and jazz. It was a perfect mix.

Bodtroff had some transcendant solos throughout the night. There were too many to keep track off. Not to be outdone by Feldsott, his custom axe was pretty badass too.

They also had great chemistry on stage, which was most evident at the end of their first set. Feldsott was on stage by herself to close out the first half when an extremely inebriated fan start “dancing” by the stage. Probably already holding back laughter, Feldsott completely lost it when Bodtroff, Pope, and San Luis joined the man on the dance floor.

Old You played plenty of original songs, but also had a handful of covers at their disposal. The tunes were covers in name only, because the band completely made the songs their own (minus the lyrics of course). There were selections from Creedence Clearwater Revival, Pink Floyd, Talking Heads and The Beatles, but my favorite was their version of “Chocolate Jesus” by Tom Waits. Some originals I enjoyed were “Abilene,” “London Subway,” and “Crunchy New Groove.” The latter is a working title and may change (I’ll be campaigning for them to call it “Holy City Sinner”).

Honestly, it was truly an amazing set. Allen and I were already smitten with the band, but what made our admiration grow even greater was when we were able to talk with them after the show. Each member was down-to-earth, friendly, and seemed genuinely grateful for our praise.

Feldsott said after the show that Old You defines itself as a live band and there was no way to argue with that. Get out and see these guys as soon as you can. Tour dates can be found HERE.

Below is a quick video I took of the performance. Enjoy! 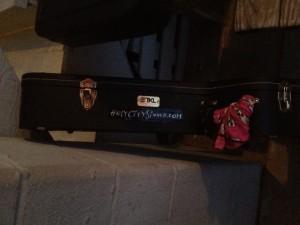 What’s that? The HolyCitySinner.com sticker on Young-Mi’s guitar case? The band has good taste in local websites!