Yes, yes the Charleston Beer Garden was over a week ago, but that doesn’t mean I can’t post a short recap of the event.

The Holy City is no stranger to craft beer or festivals centered around them, but that doesn’t mean new events shouldn’t be welcome! And Chucktown definitely welcomed the inaugural Charleston Beer Garden with open arms. Despite the excessive heat and long lines, there were plenty of folks at Brittlebank Park who had no intentions on leaving.

Besides all the offerings of craft beers, there was also live music, corn hole, a photo booth, food trucks, beer classes and great views of the Ashley River. I spent most of time at the beer tents, food trucks, and stage, so it’s only appropriate those were my three highlights…

BEER HIGHLIGHT – Although there were plenty of tasty brews, my favorite libation was Leinenkugel’s Summer Shandy. This pick may have been influenced by the sweltering heat, but no matter, it was most people’s favorite drink that day. The Summer Shandy is the perfect warm weather beer. It had a very strong lemon taste and didn’t taste like a beer at all. It was the most refreshing option during the Beer Garden.

FOOD HIGHLIGHT – Roti Rolls ruled the day for me. It was so good, I even went back for seconds. I opted for the Frank N’ Beans – a hot dog with butter beans, pimento cheese, and some other toppings – and loved it. It was ridiculously good.

MUSIC HIGHLIGHT – Without a doubt, the best surprise of the day was seeing Shovels & Rope play. Cary Ann Hearst and Michael Trent showed over their many musical talents as they switched around instruments and split singing duties. Their performance built excitement for their upcoming album release and show at the Pour House.

The first Charleston Beer Garden was a huge success and I hope there are many more to come. The event was planned very well and there was much to do. 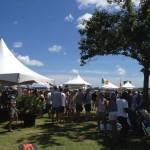 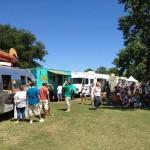 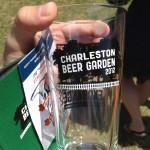 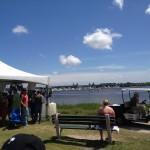 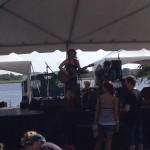 More pictures can be found HERE.