Brew with a View, one of my favorite Holy City events, took place on Tuesday (8/30/11) at the South Carolina Aquarium. If you love our Aquarium, but wish you could relax and leave the little ones at home (or avoid other people’s kids) than this event is certainly for you.

The crowd is 21-plus only and takes place after normal business hours. It’s a great event that supports many aspects of our community. So, not only did the visitors have an amazing time, they were also supporting many local businesses. In fact, ticket sales from the event went to the Aquarium’s conservation and education programs.

Each guest was able to browse through the entire aquarium and enjoy the exhibits at their leisure. There were five tables set up through out the Aquarium where guests could sample small dishes from local restaurants. Each dish featured sustainable seafood and a craft beer that paired perfectly with it. If that wasn’t enough, there was also live entertainment and dessert for sale!

Upon walking in, each guest was greeted with an acoustic guitar being played and then handed a “Brew with the View” branded mini-glass. From there you were free to enjoy the sights, sounds, and tastes!

Since most of you are familiar with the exhibits at the Aquarium, I’ll just be providing a table-by-table breakdown:

Waterscapes (at the Marina Inn at Grande Dunes, Myrtle Beach) – They may not have been from Charleston, but no one seemed to mind as they were scarfing down their delicious sampling. The chefs provided seared grunt with Carolina Gold grits, rice, Dixie Lee peas, and heirloom tomato relish. It was paired with Red Hook Long Hammer IPA. The fish was seasoned well and all the toppings/sides were perfect.

A.W. Shucks – Fried grouper, shrimp and okra pilau paired with Shock Top. The dish also featured some type of tartar sauce side that had a hint of lime. This was actually my favorite table of the night! The fish was prepared perfectly and the shrimp was a nice addition. 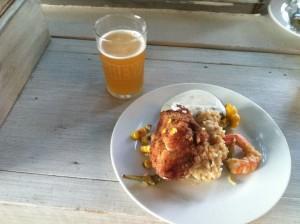 Tristan – New England scallop crudo with avocado and ruby grapefruit which was paired with Starr Hill the Love. Let me preface this by saying I really like Tristan and highly recommend you visit their Market Street location. I also have enjoyed a few other flavors of Starr Hill. With that said I did not enjoy either of their samples on this night. I’ve never liked scallops, so it was a lost cause from me to begin with.
Starr Hill is from Charlottesville, VA and has some delicious brews, but the Love was not for me. It was a wheat beer with a strong banana flavor. Hey, it won the silver medal at the 2008 Great American Beer Festival, so what the heck do I know? 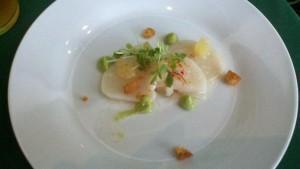 Middleton Place Restaurant – Wreckfish ceviche with peaches on bibb lettuce paired with Kona Wailua Wheat Ale. This was a solid dish and interesting beer. Wreckfish basically has no flavor, so the peaches were a nice addition. The Kona Wailua Wheat Ale was citrusy and would be perfect on a summer day. The brew is blended with passion fruit which gives it a unique flavor.

Blu – The Folly Beach favorite featured smoked red drum fish on a chip with local baby lettuces, crème fraiche and paired with Red Hook ESB. The dish was served chilled and had an interesting dynamic between the fish and chip. However, the entire sample was overshadowed by the delicious Red Hook ESB. This beer was the best of the night. It was pretty smooth and had a tasty, “hoppy” flavor. 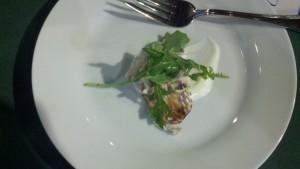 King of Pops – Although not an “official” table at the event, the King of Pops provided the perfect dessert for a nominal price. There were a few flavors available, but I chose the Chocolate Seasalt pop. It was ridiculously good. The salt and chocolate mix perfectly together for an amazing treat. There were plenty of other intriguing flavors that I’ll have to try on another date.

Loggerhead Apparel– There was a small table set up featuring this locally-based apparel company. Loggerhead was created by two South Carolinians, including one native of the Lowcountry. The company sells polos and croakies and has a decidedly local focus. They donate 10% of the revenue gained from all shirts to local causes supporting the conservation and protection of the loggerhead turtle. Plus, their entire production process takes place in the United States.

After enjoying the food, beverages, and exhibits, we were able to enjoy beautiful views of the harbor and Cooper River Bridge during a warm, summer night. 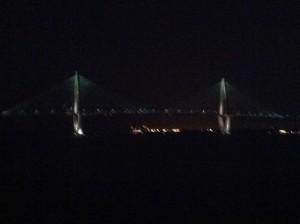 The 2011 edition of Brew with a View was quite successful and an already fun event added some new twists to keep from getting stale. If you have a chance, be sure to attend this event the next time it comes around or the equally popular “Wine on the Water.” The latter has yet to be announced though. I’ll be sure to pass word along once it is scheduled!