On Thursday, December 20th, comedian Blake Wexler will perform at Tin Roof in West Ashley. His friend and fellow comedian Rory Scovel is headlining the 2019 Charleston Comedy Festival in January, and he’s definitely not jealous at all.


Wexler started doing stand-up at the age of 15 in Philadelphia, then moved to Boston in 2007 to pursue his comedy career and attend Emerson College.

While at Emerson Blake was named as one of the funniest college students in the country at The Rooftop Aspen Comedy Festival two years in a row, and after graduating with degrees in journalism and political science he moved to Los Angeles.

Since moving to LA, Blake has written for and appeared on Comedy Central, was the first comedian/writer to appear on the ABC show “Watch Party: The Bachelor”, and can be regularly heard on The Cracked Podcast & The Todd Glass Show. He has also performed alongside Todd Glass, John Mulaney, Marc Maron, Nick Kroll, Sarah Silverman, Hannibal Burress, Chelsea Peretti Bob Odenkirk, Pete Holmes, and many more.

Blake’s critically acclaimed stand-up comedy recordings The Blake Album (2016) and Stuffed Boy (2018) debuted near the top of the iTunes charts, and his recent album 12 Years of Voicemails from Todd Glass to Blake Wexler was #1 on iTunes & Amazon. He currently resides in Los Angeles.

1. My show is first god damnit
Now could you conceivably go to both? Sure, but good luck paying off the interest on that $35 to $40 you’ll have to borrow from some loan shark.
2. Rory’s way too funny
Do you like stand-up comedy? Do you ever want to enjoy it again? Rory is so funny he’ll ruin comedy forever. I’m merely very funny. See me on the 20th, wait until your deathbed to watch Rory.
3. My Show is at The Tin Roof, not some fancy theater
Would you rather come see me do an hour in a cool dive bar located in West Ashley, or watch Rory perform at a beautiful theater like a f****** snob?
4. Rory’s already famous
Rory Scovel (probably a fake name he came up with when he moved to Hollywood) already has a NETFLIX special and has appeared in a blockbuster movie. Be the hipster that you are and let me be that weird band you discovered before everyone else (minus the handlebar mustaches/ironic accordion playing).
5. I have a more culturally diverse group of friends
See photos below for proof 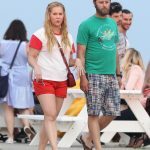 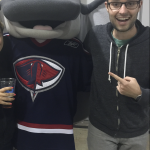